My name is Jason (Rotisken'rakehte) Arbour, Appointed Chief and Legal Representative of Kana:tso Kaniengehaga First Nation. In 1903 my family/band was disbanded from our Indian resserve and place of origin at Gatineau, Quebec. To date, I have been chosen to raise awareness and respectfully represent our community's legal interest of re-establish our historical rights to our traditional territory at the Chaudiere Falls.

I am indigenous to the Ottawa-Hull region of Canada. I was born and raised in Ottawa and I am happily maried with five boys and one grandaughter. 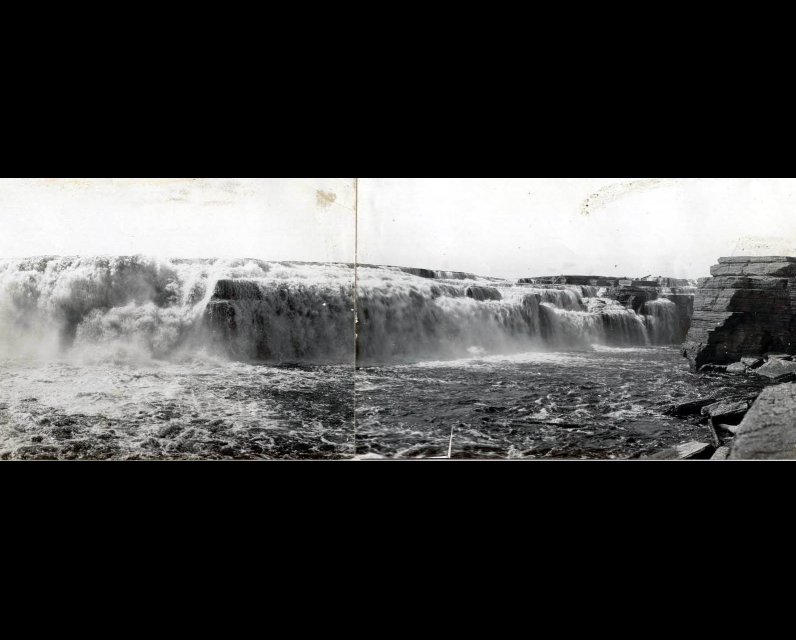 It may surprise Ottawans to know that there once existed an Indian Reservation in the heart of Canada's capital region. Please allow me the privilege of convincing you of this historical occupation with a compelling collection of legal Canadian documents.

The Kaniengehaga language is held with great expression, for it connects special meaning to people, places, and things.

Before historical records, ancestors of Kana:tso Kaniengehaga First Nation had occupied their traditional territory Canada (Settled Village) to which their Kaniengehaga mother tongue speaks. Kaniengehaga defines (People of the Place of the Flint), the Chaudiere Falls that spans today's present city's of Ottawa Ontario and Gatineau Quebec is the place to which this Kaniengehaga First Nation quarried limestone flint, hence the name. Kana:tso references (Floating Pot) and this is the name the Kaniengehaga ancestors had given to the Chaudiere Falls well before European arrival, for the mist that arose from the falls resembled that of a steaming pot, if you sat there in your canoe, it would resemble you were floating in a pot, hence the specific name.

In March of 1800 the first European settler Philemon Wright arrived at Kana:tso with his English militia, equipped with tools, rules, laws, and guns. Upon arrival Philemon Wright stated he was going to live beside the Kana:tso Kaniengehaga in harmony and if they had any concerns that they should contact his government, which some new nothing about, see (http://www.wrightfamily.ca/genealogy/histories/Philemon%20Wright%20-%20Edward%20P.%20Laberge.pdf).

In 1867 British colonies of Canada, Nova Scotia and New Brunswick unified and from this our great country derived. This new entirely formed Canadian governments "Secretary of the State for the Provinces Indian Branch" ordered Canada's first comparative statement of the populations of Indian tribes and bands between the year 1870 and 1871. On the statement it recorded the Kana:tso Kaniengehaga band of 66 Indians who were residing in the township of Hull, Quebec. On the same page and distinct it shows 113 Indians from the Algonquin band in Kitigan-Zibi, see (http://tsit-kanajakaniengehaga.webs.com/apps/forums/topics/show/8625681-canadian-census-records-1871-1901).

This Indian Branch census does not state the racial origin of the Indians in Hull township, for this knowledge, we will go to the Canadian census, Province of Quebec, District 93, Township of Hull. On pages 113 through 115 of the Hull, Quebec census, it list the Indian community members, their race, and their names, this community is of Iroquoian descent, see (http://tsit-kanajakaniengehaga.webs.com/apps/forums/topics/show/8625681-canadian-census-records-1871-1901).

That very same year the Kana:tso Kaniengehaga were infected with an exceedingly severe epidemic of Smallpox, several community members perished, half of the sick remaining were under the age of twelve years, for these facts visit (http://unpublishedottawa.com/letter/117132/smallpox-chaudiere-falls-indian-reservation).

In 1874 the land in question was ordered to be surveyed, this land surveyors map show the Indian Reservation downtown, Hull, as well as the adjacent Chaudiere and Albert islands, see (https://commons.wikimedia.org/wiki/File:Ottawa_map_1874.png).

These maps only state reserve, not Indian reservation, how could one be convinced that the said land was an Indian Reservation and not a wildlife reserve? for this information we will require a copy of the Phase #1 environmental site assessment ordered by Windmill Developments Group Ltd dated August of 2014. This environmental assessment is 441 pages in total, on pages 170 through 190 you will see sections that state the Reporting Organization is Aboriginal Affairs and Northern Development Canada, directly below this it also states the Reason for their Involvement is that the said land is an Indian Reservation under the means of the Indian Act, the assessment is also equipped with GPS quadrants, see (http://tsit-kanajakaniengehaga.webs.com/apps/photos/photo?photoid=203434564 and http://tsit-kanajakaniengehaga.webs.com/apps/photos/photo?photoid=203434565).

In 1903 a Provincial Court ordered the eviction of this federally protected Indian Reservation, community members were disbanded and never relocated as a whole, descendants of this abbreviated Kana:tso community remain landless, hidden in plain site and praying for reconciliation.

The knowledge I have shared today is not being addressed or studied in our schools or institutions such as Carleton or Ottawa University. For more knowledge concerning the Indians from Kana:tso please visit, http://tsit-kanajakaniengehaga.webs.com/. I hope this compelling collection of legal Canadian documents has helped convince you that there once existed an Indian Reservation in the township of Hull, Province of Quebec.

The writer's name is Jason (Rotisken'rakehte) Arbour and this is His-Story.

​Additional posts on this subject: